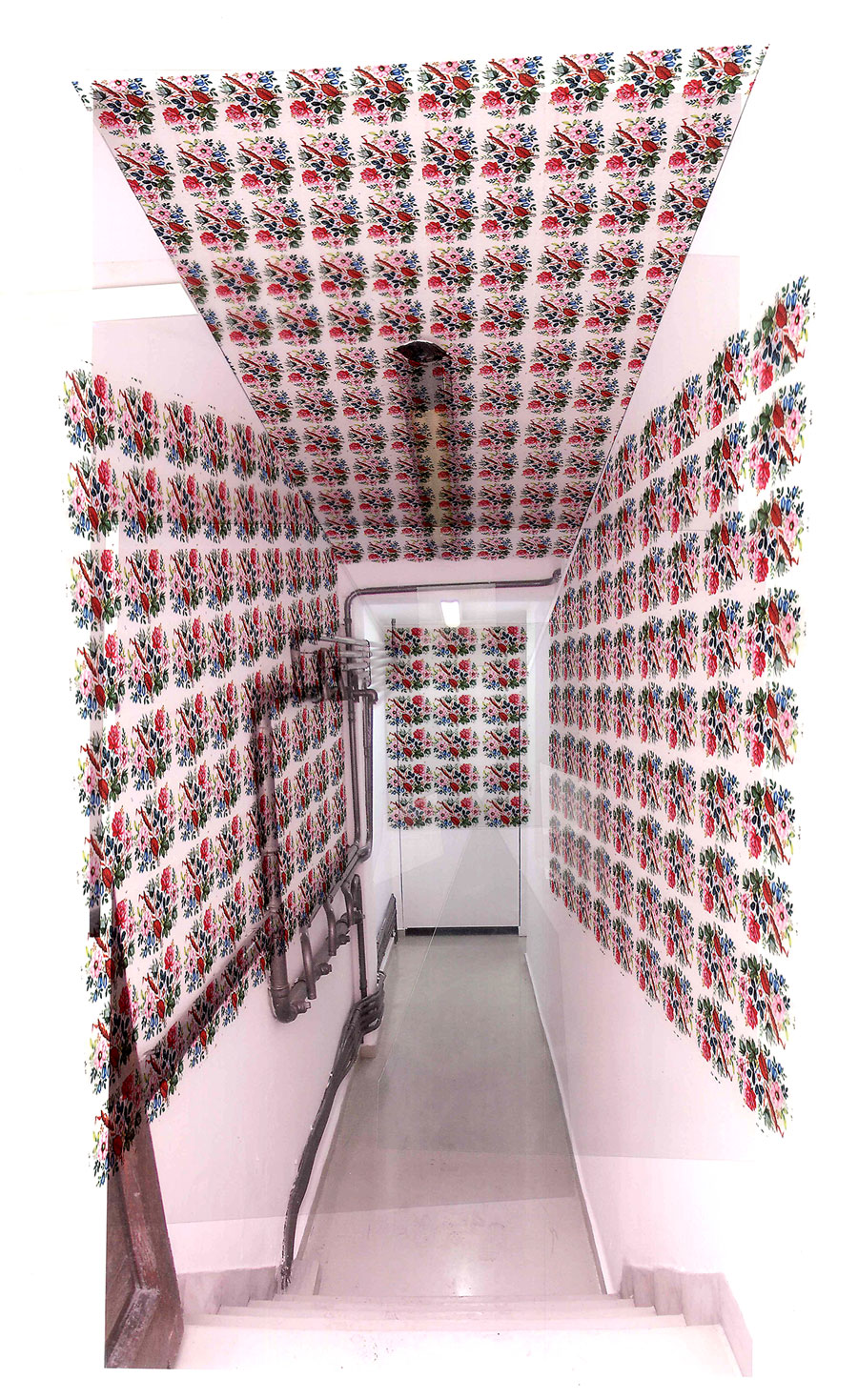 Digital studies for the installation In Site Compression, 2007, corridor and main room.

Digital studies for the installation In Site Compression, 2007, corridor and main room. 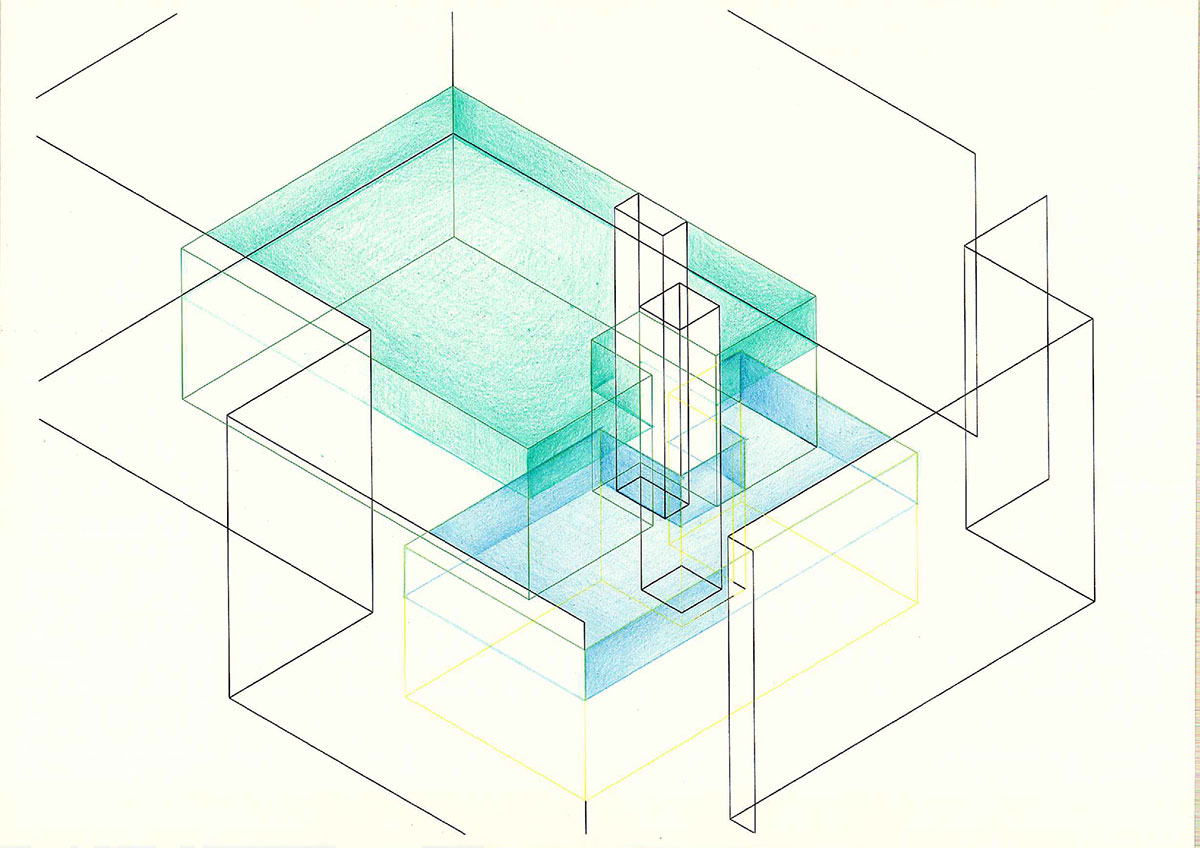 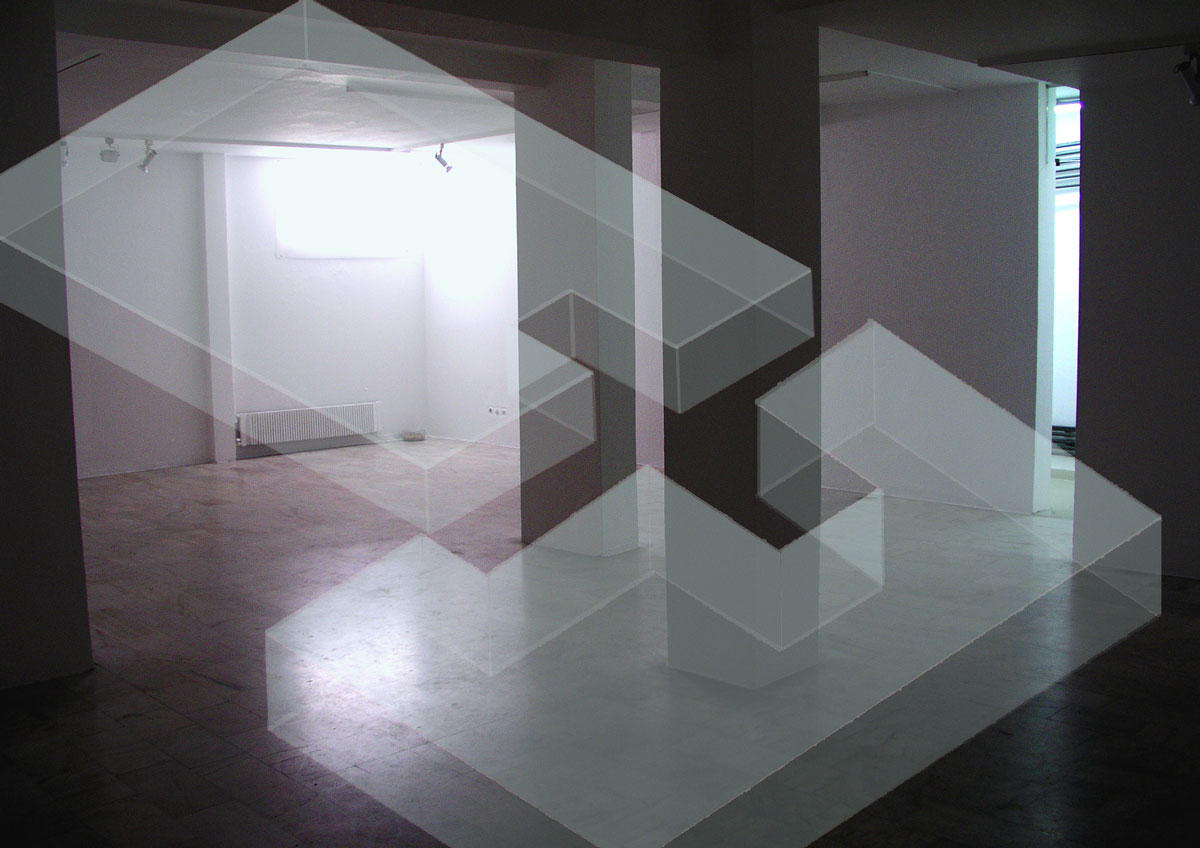 The two volumes of In Site Compression locked out part of the gallery’s empty space, by transmuting it into solid forms.

The two horizontal volumes sliced the gallery into three horizontal parts, performing a metaphorical ‘cut’ that appeared to materialise part of its empty space. 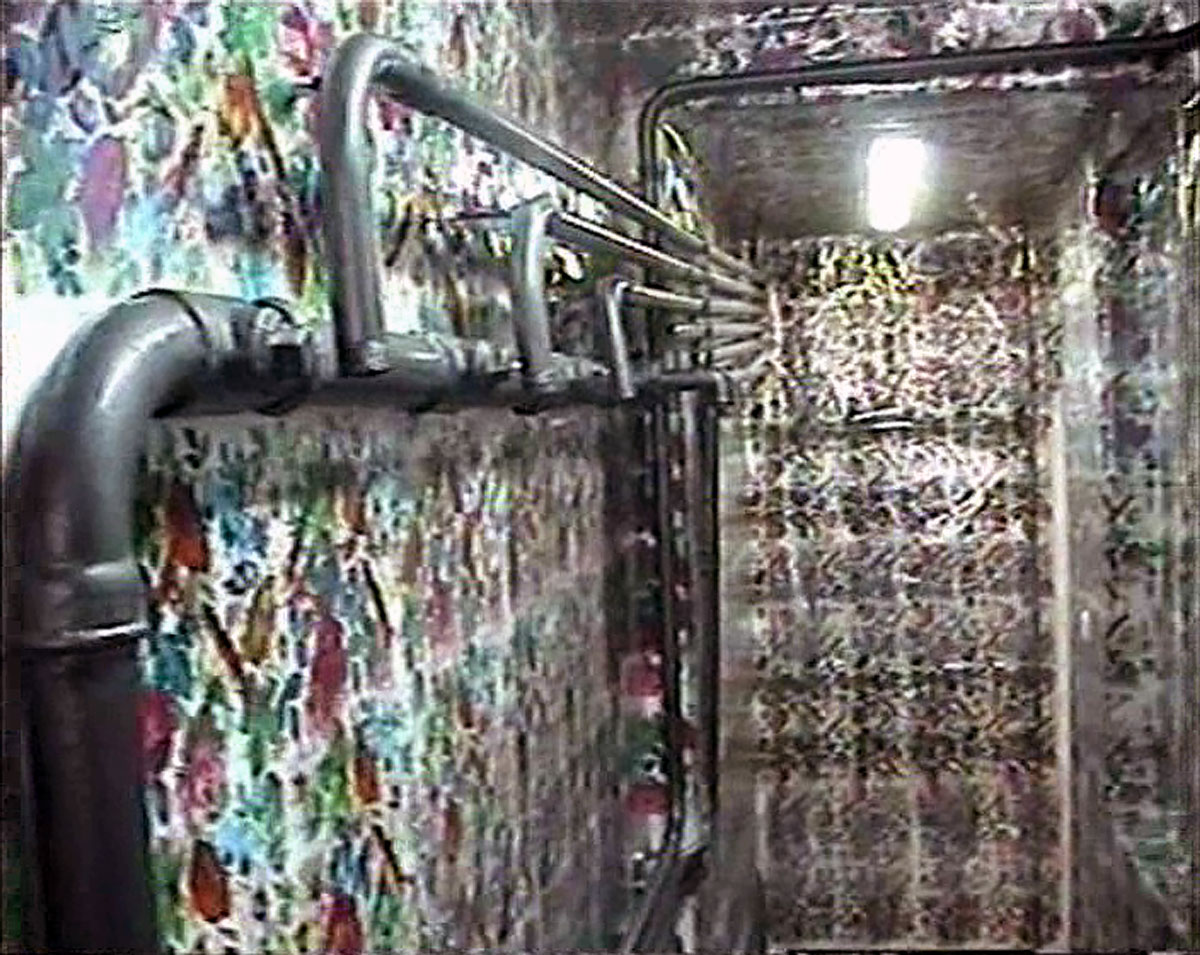 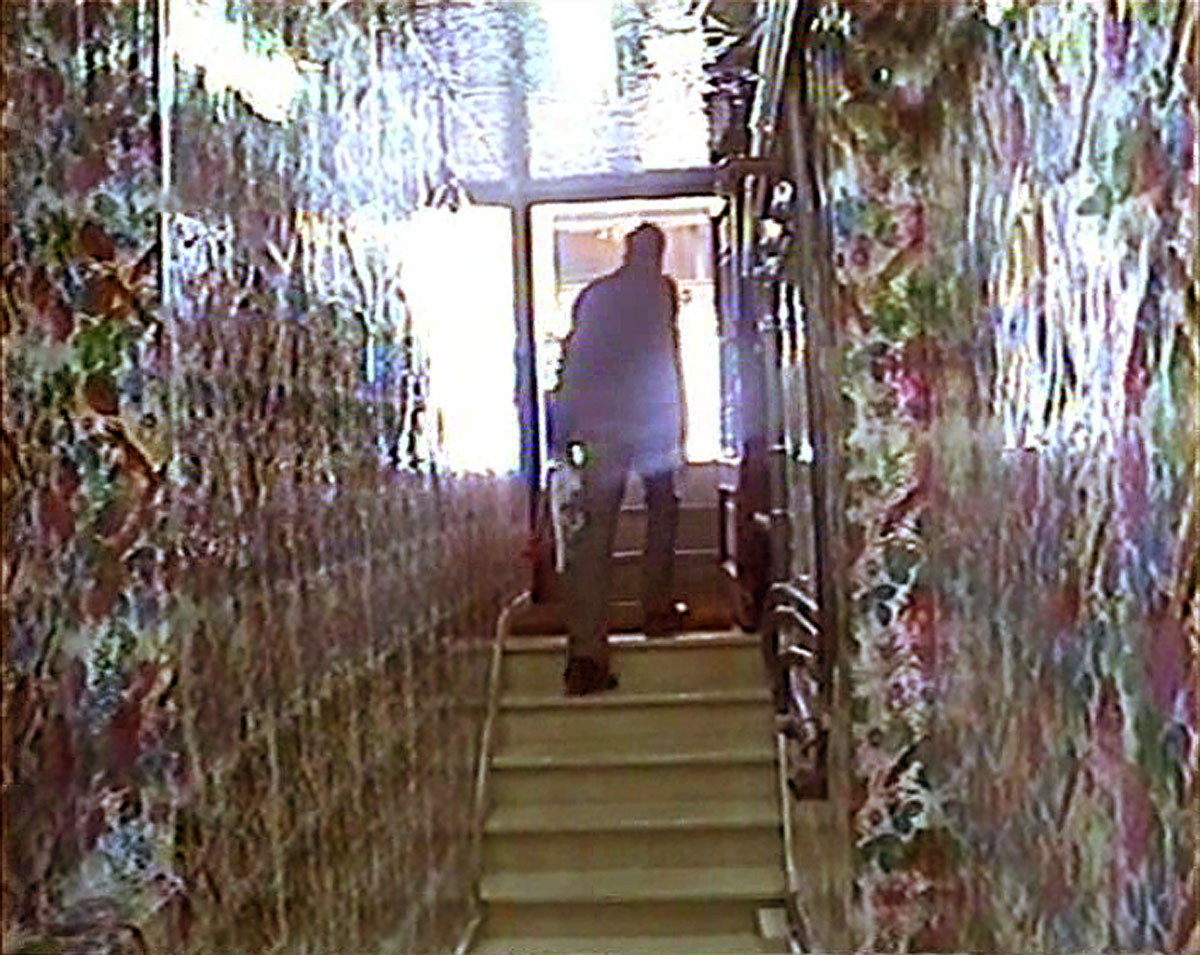 The role of the frontier is a mediating one, a middle place, a space in between. The corridor, as a space in between, could be a lingering place for viewers, but also a border, ‘a site of anxiety’, (Rugg 2010: 157), where antithetical notions of openness and closure, private and public, familiar and strange, were evoked by the juxtaposition of the urban environment and the gallery space.

The corridor transformed the void of the middle place, the frontier, into a sort of bridge that offered a plenitude of ‘exchanges and encounters’ (Certeau 1984: 127), which welded together the abundance of the city with the aura of the installation in the main gallery.

The space of the corridor as an entity, with its abstract and geometric connotations, contrasted with it as a place, as the location of an event: the place where something had happened. While moving in the narrow corridor space, viewers experienced its heavy baroque aesthetics – the narrative evoked by its flowery iconographic palimpsests and the characteristic smell of the synthetic sheets – along with its sense of confinement.

Together with their experience of the present, viewers in the corridor were also prompted to experience the past through the printed sheets, which were not neutral. The sheets’ successive layers stressed their different textures and provoked visual oscillations that revealed indirectly to the observer the various stages of the production process, which was close to handicraft, and suggested that the time and energy spent in constructing the ‘wallpaper’ had been captured and packed between its layers. 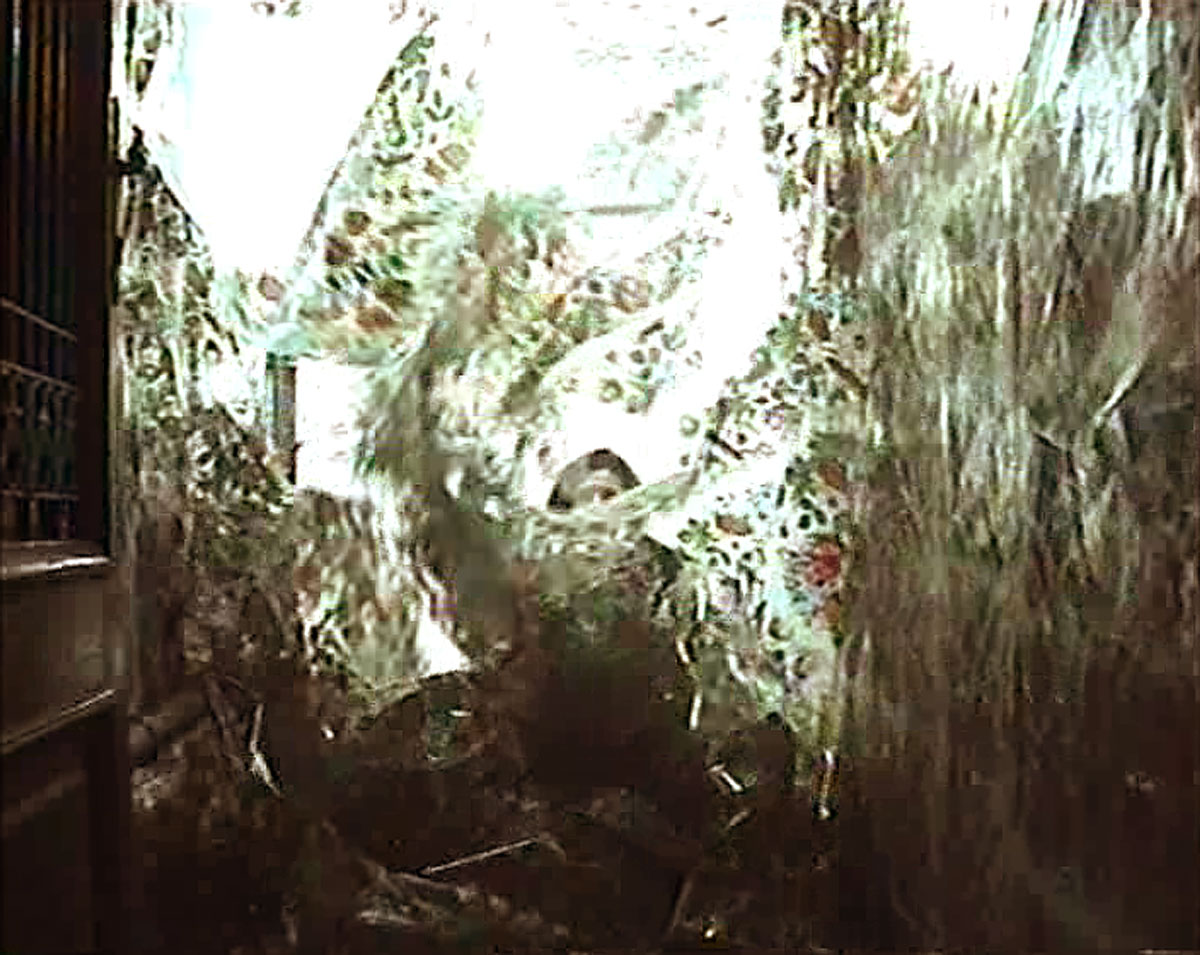 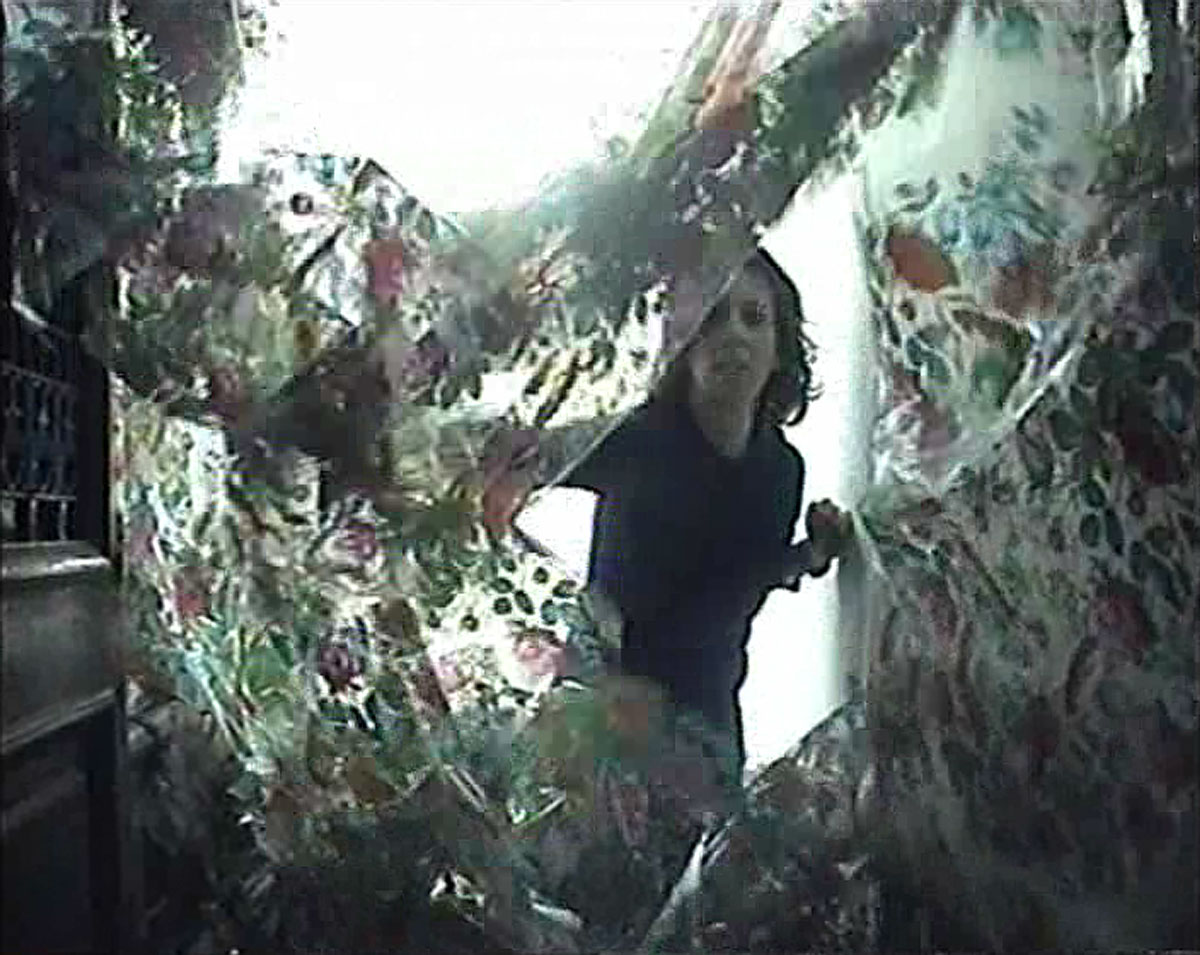 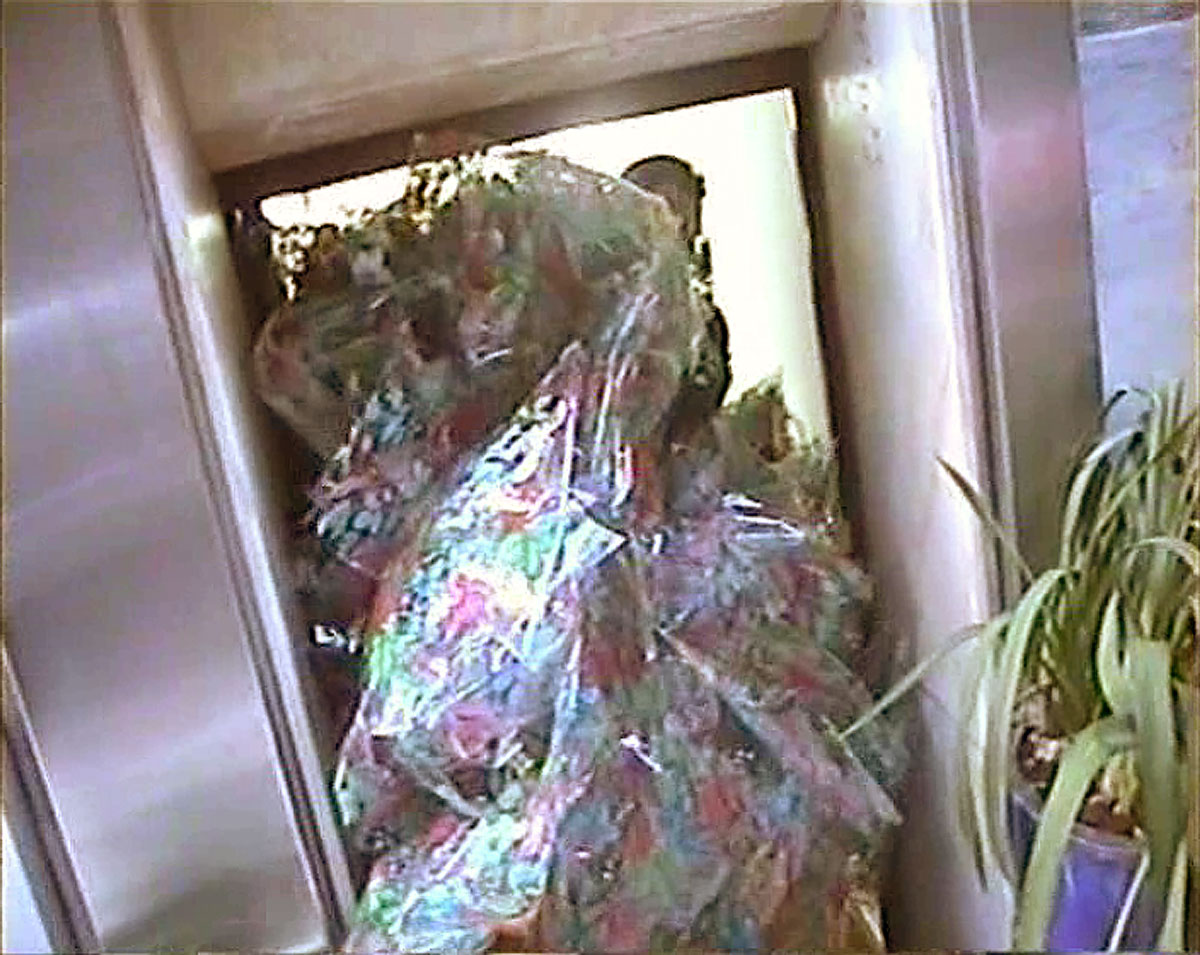 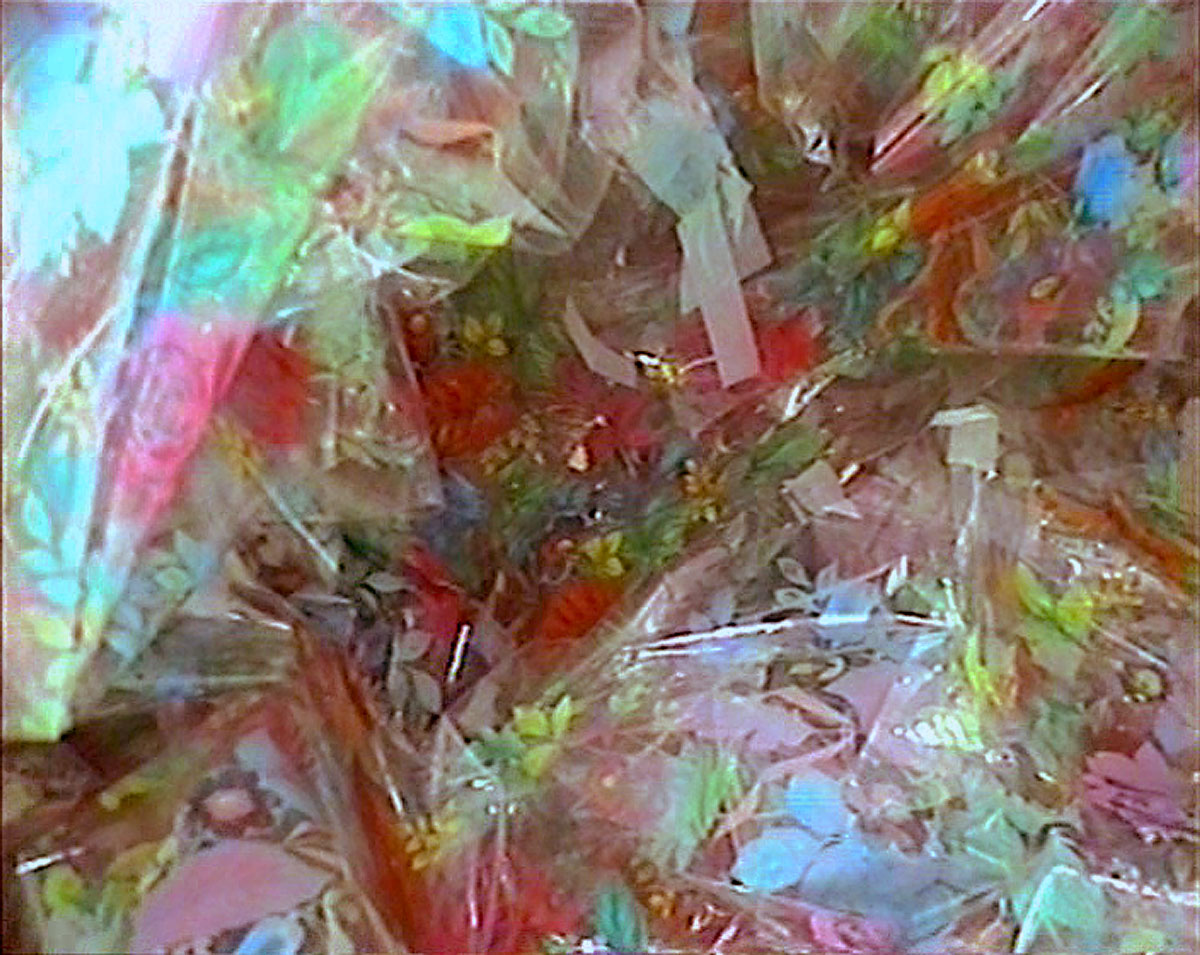 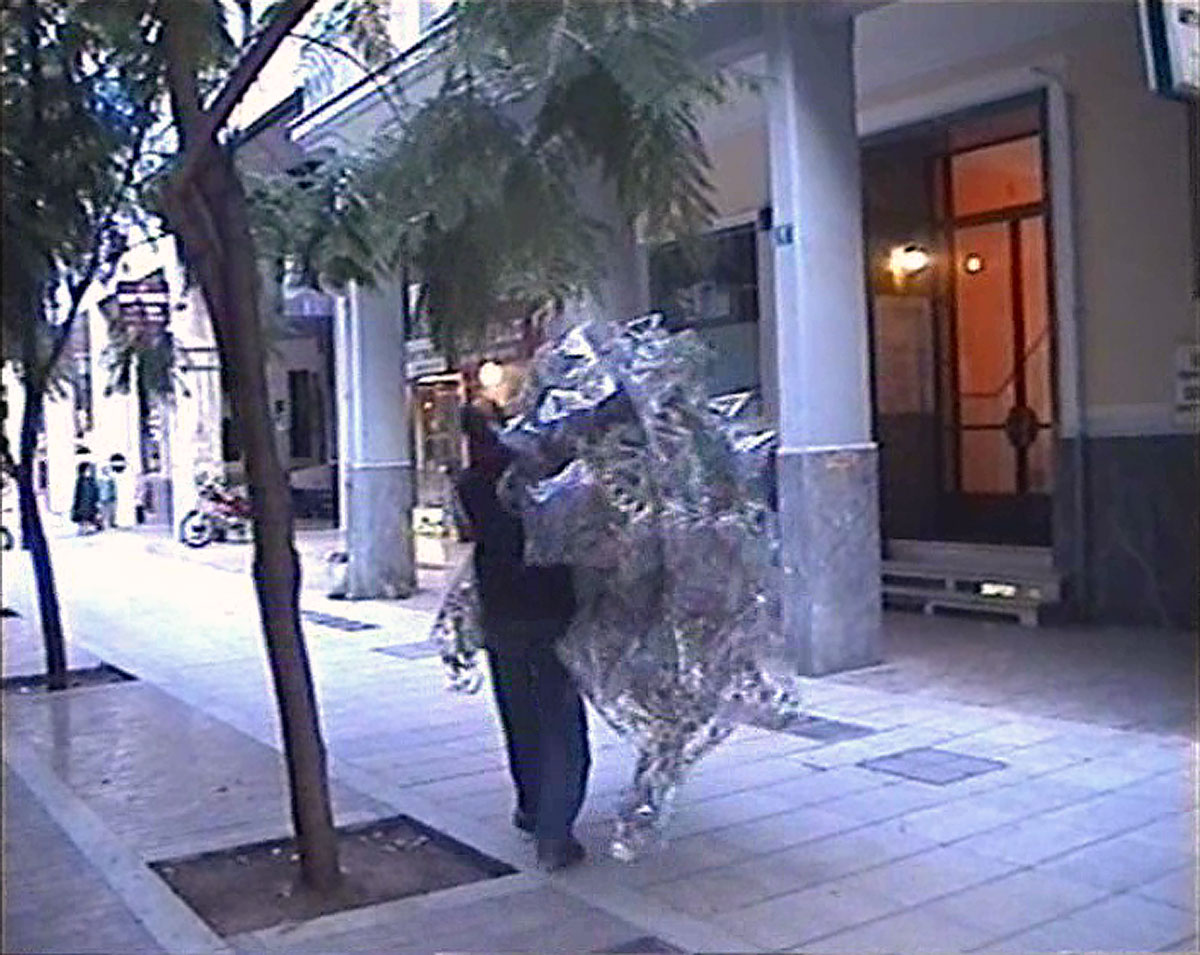 In Site Compression, 2007, video still, destruction of the corridor part of the installation. Gallery 7, Athens

All this energy seemed to have been released and time stopped when the installation was demolished and the material thrown away. Its demolition was a gesture that opposed the notion of permanence associated with art’s ‘timeless’ value with the time spent, and added to the ephemeral aspect of the work.

The photographic and video reproduction of the act of destruction has a double function: first, as proof of the installation’s temporariness and site-specificity; second, it permits the work to be revisited and offers continuity in time.

The two volumes of In Site Compression installed in the main gallery gave shape to what was the indeterminate and abstract nature of the empty gallery space, and transformed it into some kind of stabilised void. The two forms constituted not only a positive form within the negative space of the room, but also a negative space in themselves, as their shape was designed to correspond exactly with and echo that of the gallery. 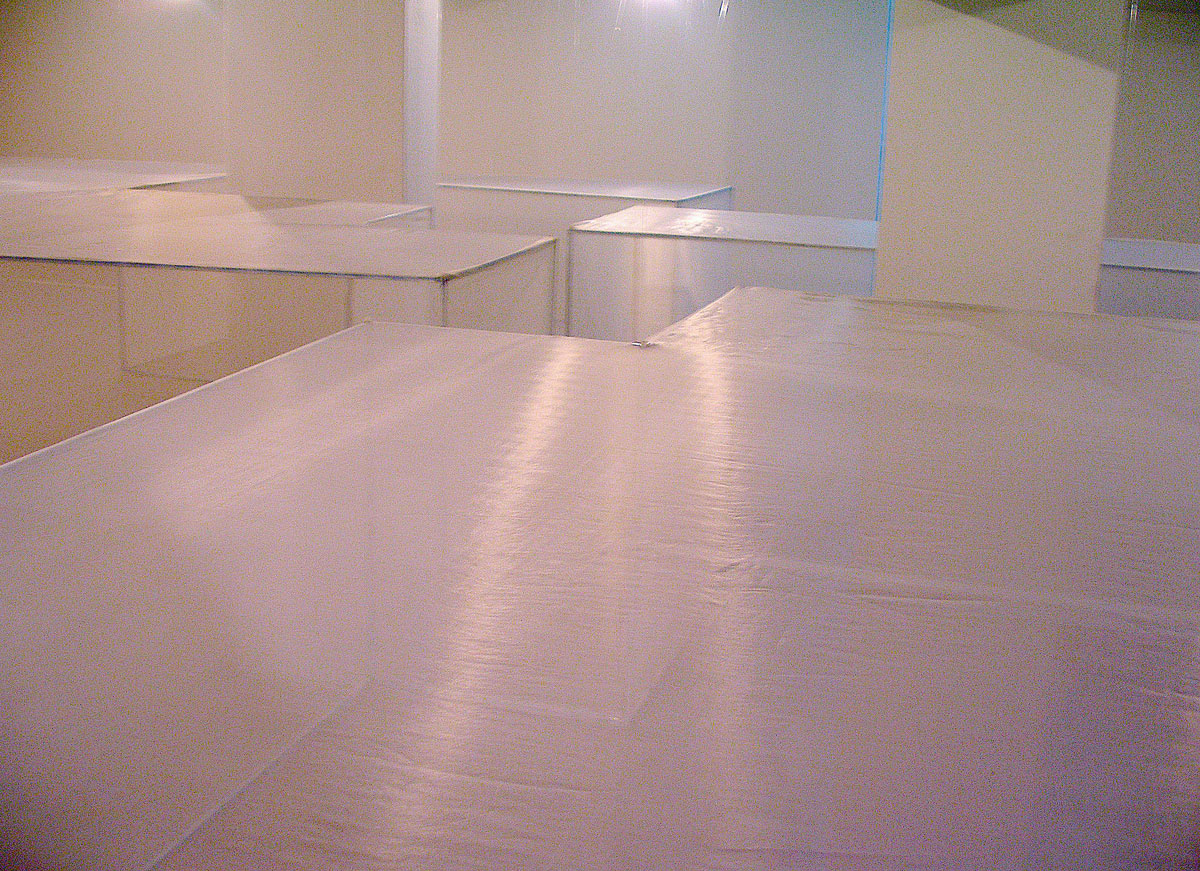 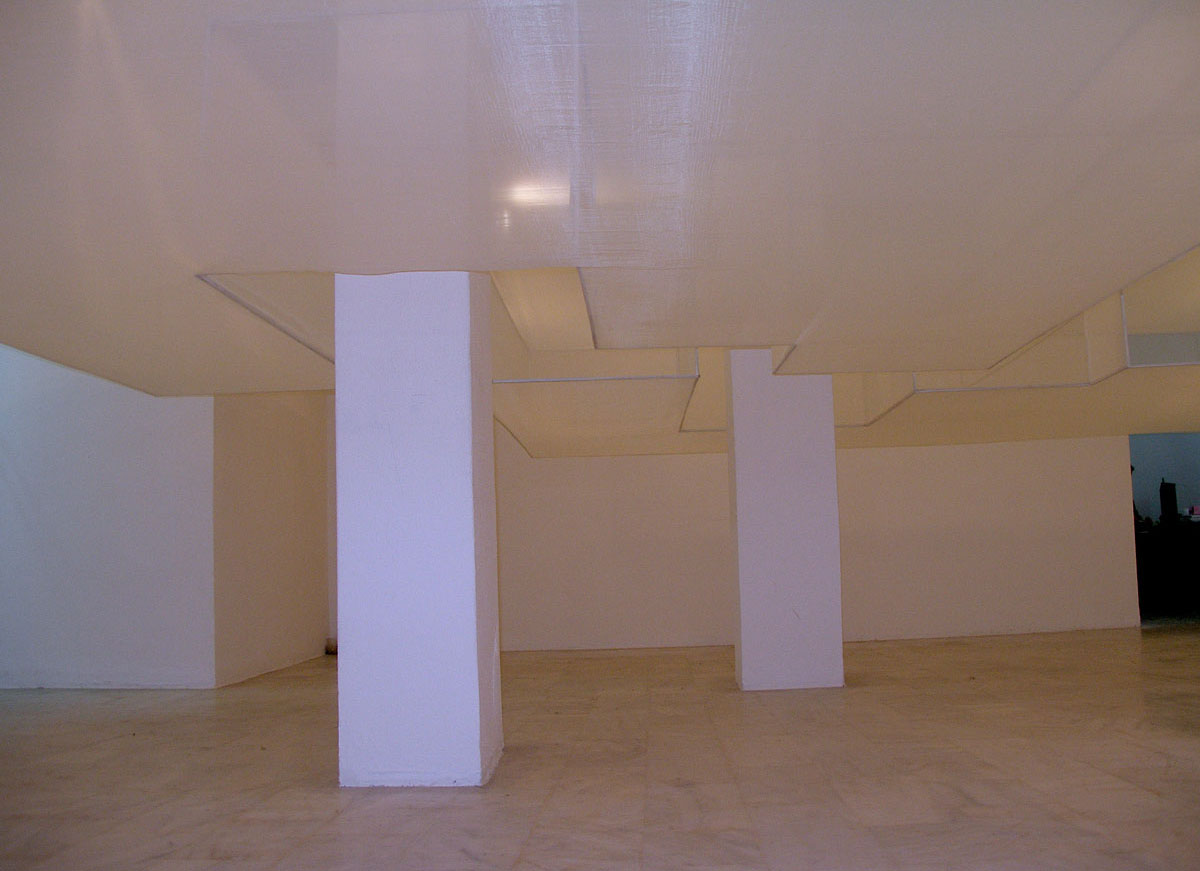 The presence of the installation, by inverting part of the gallery’s abstract emptiness into concrete forms, comprised a solid shape of the void. This sense of the gallery space and the two geometric structures being both empty and full at the same time (‘filled’ with empty space) united the installation with the room.

This impression of the gallery’s ‘squeezed’ empty space was also strongly connected with the sense of the gallery propping up the huge building above it.

The space of the corridor as an entity, with its abstract and geometric connotations, contrasted with it as a place, as the location of an event: the place where something had happened. While moving in the narrow corridor space, viewers experienced its heavy baroque aesthetics – the narrative evoked by its flowery iconographic palimpsests and the characteristic smell of the synthetic sheets – along with its sense of confinement.

In Site Compression created paths in the space of the gallery, a kind of labyrinth. Hence it functioned as a kind of ‘landscape’, meaning a site, the impression of which appeared to reach beyond the spatial limits of the gallery. The spatiality opened up by it resembled the experience of the spatiality of the horizon, which is neither spatially nor temporally located in the usual sense, but instead is what delimits the totality of the objects between the viewer and itself. A similar experience of spatiality occurs at night. 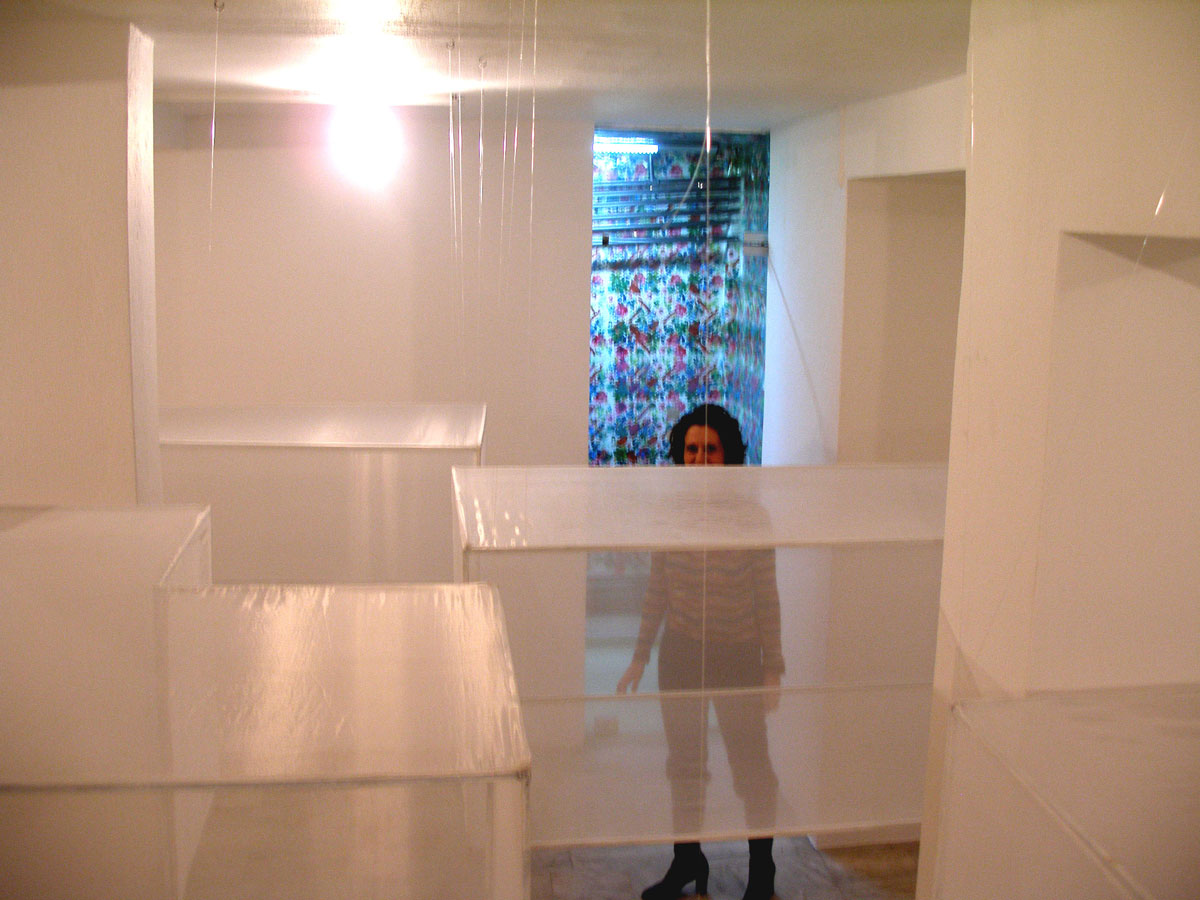 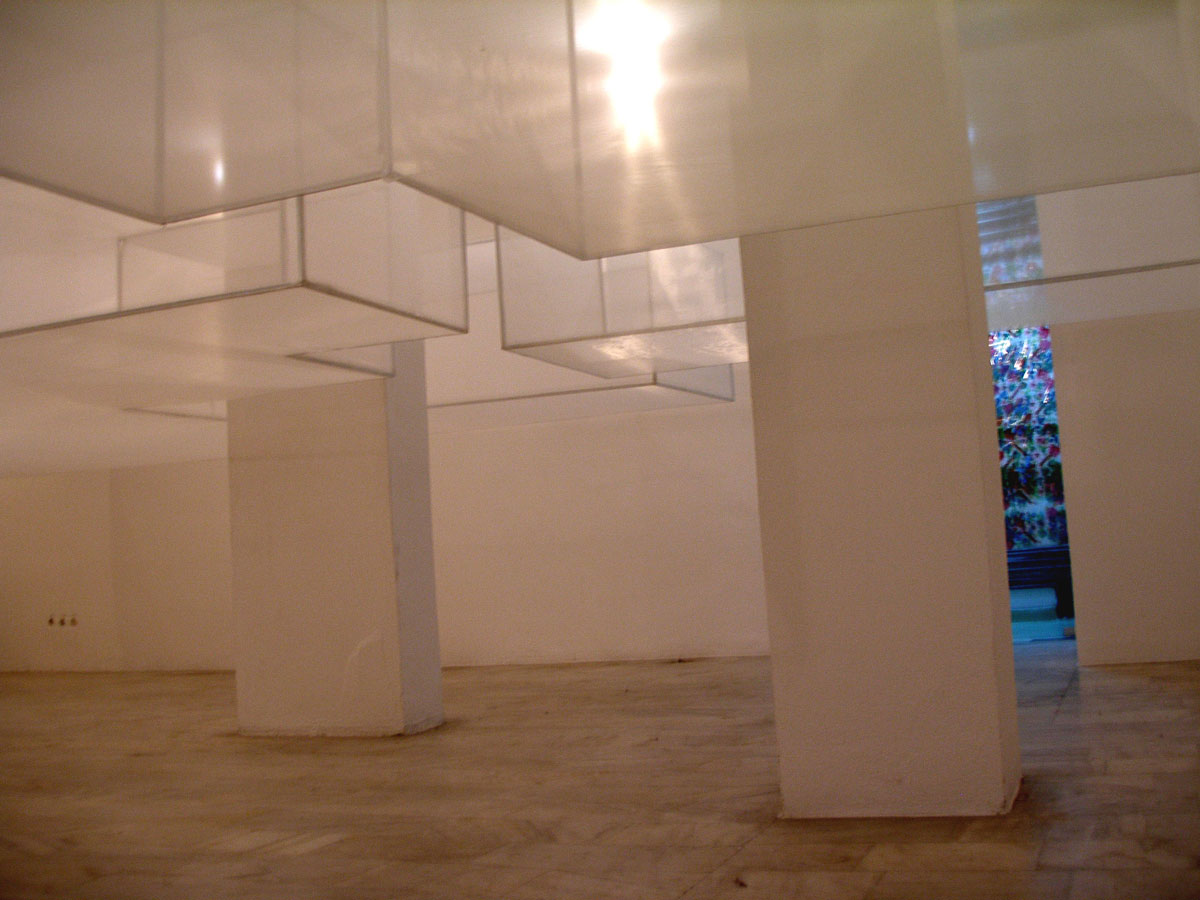 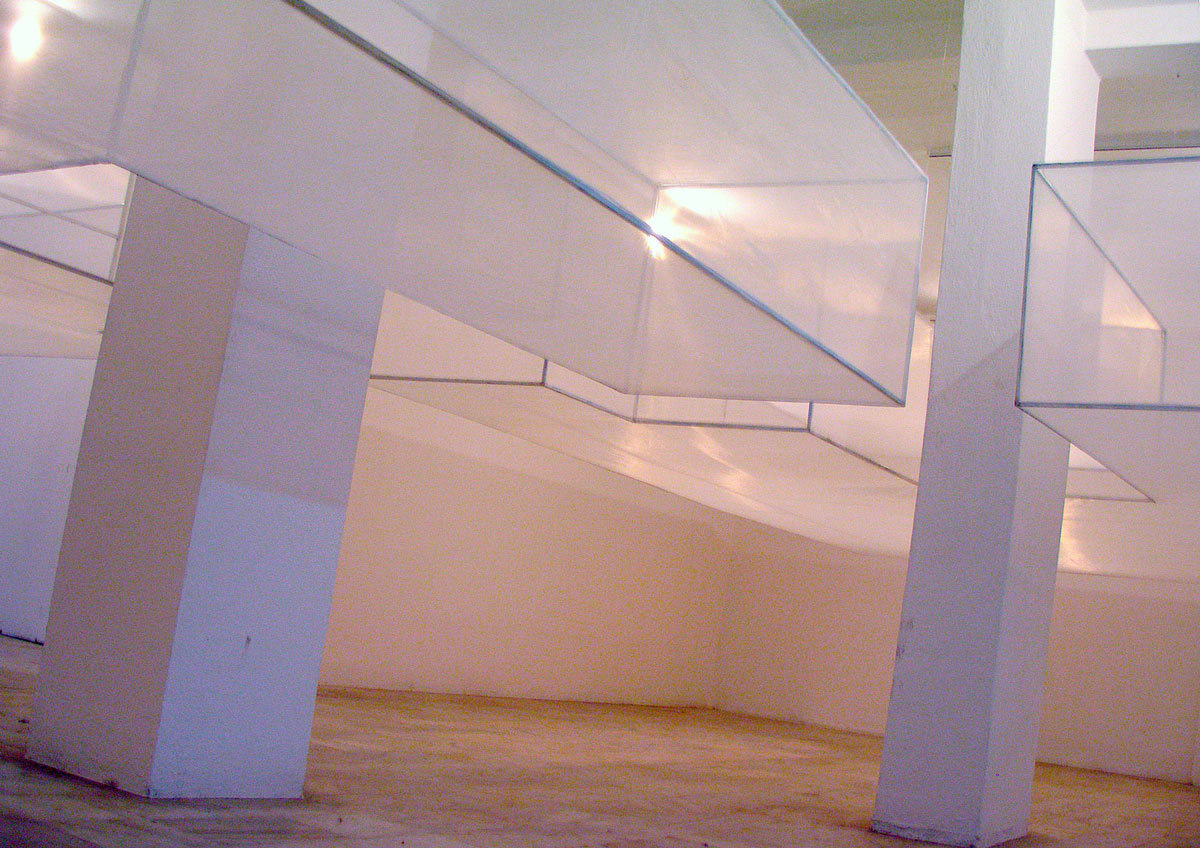 Because of its labyrinthine shape, the multiple perspectives offered by In Site Compression originated a sense of decentring to viewers, to which was added that of wandering dislocated and disoriented around its two volumes as the result of the continuous appearance and disappearance of others. The blurring quality of its volumes created encounters between presence and absence, isolation and community.

By restricting the space between the viewer and themselves, these structures created a spatiality, which because of the lack of ‘things’ to be experienced and the blurring effect of the material, turned viewers’ perception back on themselves. In Site Compression constructed for each visitor the plane of a dual experience: alone and together.

The installation actuated by the movements and operations of the viewers who oriented it and temporalised it, was turned into ‘a practiced place’: ‘In relation to place, space is like the word when it is spoken, that is, when it is caught in the ambiguity of an actualization, transformed into a term dependent upon many different conventions, situated as the act of a present (or of time) and modified by the transformation caused by successive contexts’. (De Certeau 1984:117)

The space inside the hollow structure of the two volumes, seen as a physically real form, attested to some kind of indeterminate and non-static ‘site’, though, for me, this did not exist as a permanent, knowable whole. The space of the installation was not just the one it inhabited as a physical object and construction; its spatiality was like a tunnel leading somewhere else, a space associated with the viewer’s memory of other spaces in empty buildings all over the city.

In the installation’s documentation, the work’s relation to real experience in real time and space is broken and replaced by a series of video recordings. On the other hand, documentary material consists of new material existing in another real time and place, and calls for the viewer’s presence to be experienced. This shift in the real time of the installation to the time of its reproduction is particularly important due to its significance as a site- specific installation, and results from its shift from a literal to a ‘functional’ site:

The literal is an actual location, a singular place. … In contrast, the functional site may or may not incorporate a physical place. Instead it is a process, an operation occurring between sites…it is an informational site, a palimpsest of text, photographs and video recordings, physical places, and things…’ (Meyer, cited in Doherty 2009: 38)